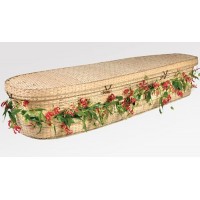 Your personalized caskets and custom designed coffin is a great way to share your team or life passion. The funeral industry is ultra competitive and having a unique marketing channel to sell your unique products, partner with funeral homes or life insurance companies to strategically market your brand, find out how personalizedcaskets.com can be your brand online today.

As Originally Posted On MSNBC

In death, as in life, Baby Boomers want to do it their way. And the death industry is gearing up to meet this demand as the generation that bucked authority customizes how it dies.

Boomers, who never lost their youthful taste for rebellion, want to control every detail of their “stairway to heaven” up to and including buying pre-need funerals to prepare for the inevitable. The industry also is responding by consolidating to take advantage of economies of scale as Boomers age.

“If you look at the Boomers, they’ve sort of changed everything as they’ve moved along the consumer spectrum,” said Clint Fendley, analyst at Davenport & Company LLC.

“We’re personalizing everything,” said Nathan Smith, founder and president of ‘Til We Meet Again, a custom casket and urn company. Smith opened his flagship store in Wichita, Kansas, three years ago. Today, he has four stores around the country and franchise agreements for more than a dozen others. “There is such a huge demand for this product,” he said. “The Baby Boomers are driving this.”

Smith said the extent of personalization can be significant. One customer, a “self-professed hippie that was stuck in the ’60s,” Smith said, ordered a casket with an exterior that looked tie-dyed.

Urn shaped like a motorcycle gas tank.
‘Til We Meet Again

For this “born to be wild” generation, Smith said motorcycle-themed items are popular. “We have urns that look like motorcycle gas tanks we can custom paint to match their bikes,” he said. “We’ve done a lot of caskets with hot rod flames or painting them to match the bike.”

Smith has licensing agreements with entities ranging from pro sports teams to Orange County Choppers to the Vatican.

Nationwide, the funeral industry is worth $17 billion, and there are between 2.4 million and 2.6 million deaths each year in the United States, according to the Sterling, Va.-based International Cemetery, Cremation and Funeral Association. While the number of deaths has remained steady, the outlook for the industry is strong, considering the aging Baby Boomer generation — 76 million Americans were born between 1946 and 1964 — is expected to push the death rate higher within the next decade.

Ann Bastianelli, CEO of marketing firm Anthology Consulting and a marketing professor at Indiana University, said the Boomers’ view of life was reflected in their attitude towards death.

“One of the things we identified was this whole notion that your life is individual and personalized, and your death should be also,” she said.

Piano-themed coffin made by ‘Til We Meet Again

The demand for customization in everything from caskets to memorial services to keepsakes will help boost the industry’s earnings. “There’s definitely a revenue opportunity for funeral homes in general if they can offer value-added services,” said Kathy Williams, co-owner of American Funeral Consultants.

“It’s up to the funeral directors to kind of think out of the box to think of things that will generate income and will make the funeral meaningful for the families,” Williams said.

Indeed, Wall Street analysts estimate that Service Corp International, which just announced it is acquiring Stewart Enterprises in a $1.4 billion deal to become the largest U.S. funeral company, will see next year’s profits triple what they made in 2006. The combined company, operating over 2,100 funeral homes and cemeteries, is expected to have annual revenue of almost $3 billion and generate about $60 million in annual cost savings.

Of course, Boomers are primarily in their 60s; they aren’t at death’s door yet. But their penchant for controlling everything, even something as fundamentally uncontrollable as death, dovetails with the growing business of what the funeral industry calls “pre-need” sales. “Through pre-need sales today, operators can lock up that future volume today,” Rice said.

Ten years ago, the industry was in a slump, with costs rising and a slowing death rate. By selling pre-need funerals — the plot, the coffin, the service, even the catered reception afterwards — funeral companies were able to generate revenue, even if profits slumped.

Although they can’t book all of the revenue from “pre-need” sales right away, “It’s a pretty nice built in stream of future revenue you can count on,” Fendley said.

Service Corp reported a 10.2 percent increase in cemetery “pre-need” sales in 2012. But Chief Marketing Officer Philip Jacobs told the Houston Business Journal recently that only about one-third of the funerals his company handles are planned in advance.

Funeral service providers also can suggest to customers that even cremation, which has increased in popularity as the cost of a traditional burial has climbed above $6,500, can be personalized — for a price.

The vast majority of the nearly 20,000 funeral homes in the United States are independently owned, with the rest held by a few big corporate players like Service Corp. The newly combined company will have a footprint of 1,653 funeral homes and 515 cemeteries, which gives it purchasing power and economies of scale that will let it offer as many options for Boomers’ end-of-life as Starbucks does for their morning coffee